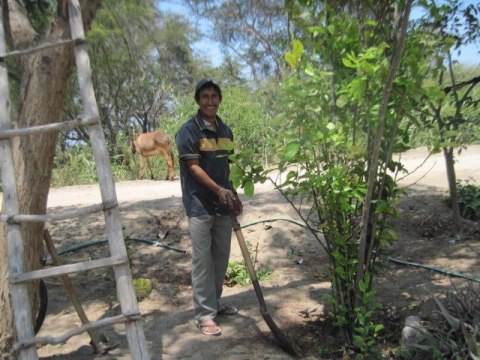 A loan helped To buy a heifer to break into the cattle breeding business.

Benjamín is 37 years old. He is separated and has two children aged five and eight. He lives in La Clake village, a rural area whose inhabitants work mainly in farming and raising and selling animals. The village is in Reque district and is located twenty minutes from the city of Chiclayo. Benjamín has been doing agricultural work since he was fifteen years old. He works as an agricultural laborer in the area's fields and, through this activity, he manages to cover his expenses and support his children. He would like to increase his level of income to improve his quality of life and that of his children. For this reason, he has decided to set himself up in the business of raising and selling cattle. He would like to buy a heifer so that he can fatten it up and then mate it with other thoroughbred bulls in order to later sell the resulting calves either alive or as meat. To achieve his goal he is requesting his first loan from Edpyme Alternativa for 1,000 nuevos soles. He is a person with a great desire to get ahead and make progress. His biggest wish is to continue growing as a businessman and to provide his children with the opportunity to have a solid future.