Celebrate International Women’s Day all year. Get $50 to lend when you sign up to lend monthly! 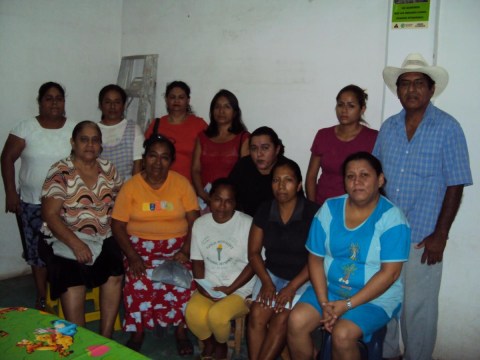 This group is called “Luna” (Moon). The members chose this name because it was night time when they came together to form their group. What is more, that particular night was a full moon. A further symbolic meaning for them is that there are times when in difficult situations in life, everything seems dark but inside everything there is a light and this is the light of the moon. At present everything seems to be dark but the light of hope is given to them by the generosity of good people who light the paths of other. Another of the qualities of identification with the moon is that the majority of the group's members are women and their femininity is attributed to the moon. Their representative is called Adriana Kukene A. Baños. On this occasion we focus on talking to a member of the group called Mrs Blanca Imelda G. M.. She is 40 years old. A little more than 8 years ago she decided to unite her life with that of Don Pedro who is 44 years old and with whom she has a 4 year old child who is starting his preschool education (kindergarten). Her son is a very important reason to fight and get ahead with her projects since he is an only child and her main source of happiness within her marriage. Blanca completed her senior high school studies but a large part of her life has been dedicated to helping her parents and her family, until she met Pedro at the age of 32. Blanca and her husband have a mobile clothes stall where they sell t-shirts, pants, baby clothes, women's and men's underwear, skirts, blouses, socks, shorts and shirts. They started their business 8 years ago. Blanca and her husband are are in charge of the clothes stall and work with a lot of enthusiasm since they love their work and it is their main source of income. To arrive at their place of work, Blanca has to get up very early since her place of work is outside the home. Every day she has to take her son to school, while her husband is in charge of the business. She currently doesn't have her own home, nor a fixed place where she can sell her products. This is why they move from one place to another. Blanca joined her group as she needed a loan which she used to acquire more goods for her business. She will use this loan to buy jeans, dress pants, a range of shirts, different types of t-shirt, as well as different sizes and styles of ladies' blouses. She will also buy socks and underwear. She mentions to us that occasionally it is difficult work and tiring to travel to other places to sell her products since this means taking her child with her or having to leave him with somebody but she has to do it. However, as we already mentioned, her love for her son encourages her and her hopes to see him do well give her the strength to carry on. Sometimes she feels obliged to give away clothes to very poor people who can't manage to buy the most basic items. She sells at a fair price and doesn't profit from the needs of other, mainly children. Blanca's biggest dream is have her own house some day which she can give to her children to support them and also to have her own premises where she can continue with her work so that she no longer has to travel from place to place. She would like to increase the number of products she sells as much as possible so that she increases her sales and offers a more complete service to her customers. She also aspires to herself and her husband being able to offer work to other people who need it, to have another outlet and for her son to some day be able to complete his professional studies, so that he doesn't have to go through what his parents are currently going through. Most of the people in this group are enterprising women who fight day by day to get ahead and have a better life. They are faced with the havoc of a difficult life in which many times their dreams never get realized, above all when nobody extends their hand to help their neighbor. They are responsible people who fulfil their obligations. They always show that they have the necessary trust in each other and a spirit of mutual help. They are supportive of each other in everything and have the necessary optimism to keep moving forwards. In the name of everybody in this group, those of us in the Fundación Realidad team would like to thank those who with their financial help make possible the hope of those who have the least. The names of those who make up the “Luna” group and their business activities are as follows: Elvira Ofelia R. Pérez. – making clothing Leobardo C. López.- electrical workshop Alejandrina C. Sánchez.- jewelry sales Adriana Kukene A. Baños.- taxi driver María Elizabeth M. C..- shoe sales Leonila D. Ramírez.- perfume sales Rosa Erica Barragán Baños.- groceries Fadia Oliva Baños D..- perfume sales Blanca Imelda G. Martínez.- clothing sales Gricela E. B..- clothing sales Sinforosa Emerenciana Marroquín.- groceries Ana S. B..- meat sales