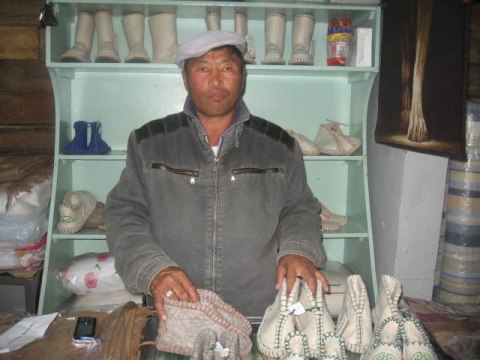 A loan helped To purchase more supplies and felt.

Ochirbat S. is 54 years old and lives with his wife and two sons in Huvsgul province, Mongolia. He and his family live in a ger, a traditional Mongolian nomadic tent. His oldest son attends university and his youngest son attends the local high school. Ochirbat currently operates a felt craft business in his town and his family members have helped his production. In 1996, he started to make handicrafts and has built a stable operation. At first, he made and sold shoes and boots; he currently designs and produces a variety of felt products. His earnings have enabled him to pay his son's tuition fees. His younger son will start to attend university by next year. Ochirbat is a modest and hardworking man. He is requesting a 1,500,000 MNT loan to purchase more supplies and felt for his crafts business.