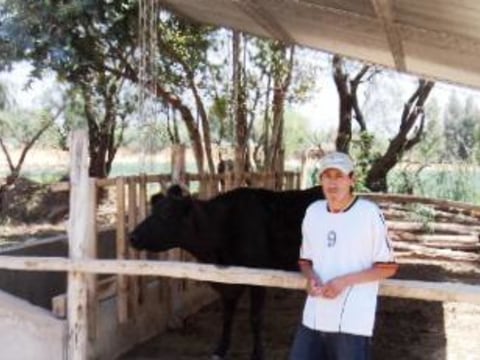 Gonzalo's loan finished fundraising, but these other borrowers need your support

A loan helped To pay for the use of a well, for irrigation.

Señor Gonzalo V. Q., lives in the Mallco Rancho area, in the province of Quillacollo in Cochabamba region. He is married and has 3 small children who are not yet at school. He lives simply, at the moment working as a bricklayer while his wife dedicates her time to raising cattle. Although they have a plot of land where he could dedicate his time to farming, Señor V. decided to seek other employment because he hasn't enough water to irrigate his land. The bricklaying work is not constant, and when he doesn't have work, Señor V. helps his wife in raising cattle. For this he needs feed such as alfalfa and maize - which have to be bought because there is insufficient water to produce their own feed. It is for this reason that he has asked for a loan: to be able to be a member of a communal well that will permit him to irrigate his plants, and in consequence to produce enough to feed their animals - and in future to increase the size of the herd. This will help him to improve his quality of life. He wants his family to have plenty of food and for his children to be educated.