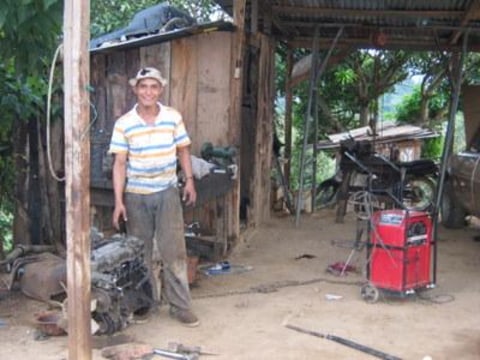 Alan Javier Z. L., 24, is married and the father of two children. He lives in La Unión’s Flores neighborhood, Olancho. He has had a machine shop in his house for several years and while he works his wife cares for the children and does the household chores. Alan learned his skill as an employee in a workshop and when he felt he’d acquired sufficient skills to work independently he decided to set up his own workshop. His advantage is that he’s a very friendly person so his workshop is very well attended by neighbors. One of the difficulties he faces, however, is that he doesn’t have any other source of income and sometimes he only has a few jobs to do. He is asking for funding to buy more work tools so that he can provide better customer service. His dream is to expand his business offering his customers a variety of vehicle replacement parts so that his income will be greater thus providing his family with better quality of life. He has been in FAMA for several cycles and has been very responsible with his payments.