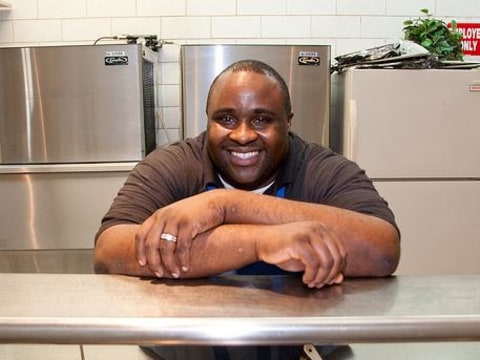 Bernard M. was managing the catering sector of the Bayou Baglery in New Orleans until 2005 when Hurricane Katrina hit the Louisiana coast. Bernard, his wife, Charlene, and his six boys were separated during the extreme chaos the city experienced during the storm’s immediate aftermath. Charlene and the boys evacuated on a truck reserved for women and children with Texas as its general destination while Bernard made his way to the closest airport. Among the many long lines of people going to different cities, Bernard chose to go to San Antonio because he had heard its mayor, Phil Hardberger, announce on CNN that the city had sufficient resources to take care of Hurricane Katrina evacuees. Because the cell phone towers had shut down, Bernard and Charlene had a difficult time getting in touch with each other. After two weeks, Bernard learned from his mother that Charlene and the boys were in the Astrodome in Houston. Bernard went to Houston, found his family, and took them back to San Antonio. The Bayou Baglery had been forced to close and Bernard did not have a job or home to return to in New Orleans. The McGraws decided to set down their roots in San Antonio and Bernard found a run-down shack on the Southside of town and set up a kitchen with a hot plate, a refrigerator, and a deep fryer from the flea market, and tables and chairs from Wal-mart. Soon after, Bernard realized that his make-shift restaurant needed to make several changes in order to meet permit standards. Also, in that short amount of time, Bernard developed an incredibly loyal and gracious clientele from the close-by military base. They raised money at the base to help Bernard make all the required repairs and to obtain various permits and licenses. Since 2007, Bernard’s Creole Kitchen has won the San Antonio Critic’s Choice Award, the Blue Plate Award and the Talk of the Town Award. Bernard studies Biblical Theology at the Baptist University of the Americas and has been asked by them to open his kitchen in their dining area. There will be a lunch line for a guaranteed amount of 85 students a day (plus additional students without meal plans who will pay cash) and a restaurant with a seating area for his regular customers. With this loan, Bernard plans to stock the restaurant with enough supplies to handle the increased amount of customers. Supplies will include food, new menus, salt and pepper shakers, a new register system, and a safe. In addition to going to school and managing his restaurant, Bernard still makes time to give back. Five years ago, he started a program called “Gumbo Under the Bridge” feeding homeless people. He says, “After being homeless, you never judge a homeless person again.” Last year, he also started a job-start program that he participated in at his own high school where students work at large companies and learn how to fill out job applications and to dress and act in a professional manner.