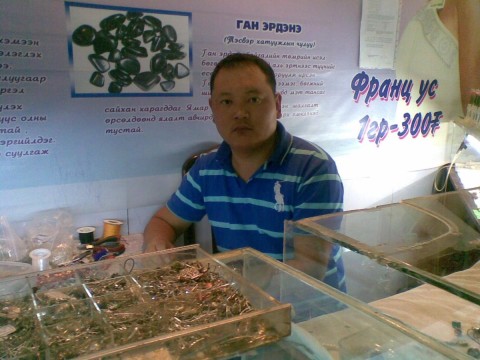 Ganchuluun T., 31 years old, lives with his wife and two children in Ulaanbaatar, the capital city of Mongolia. He and his family live together in their own ger, a traditional Mongolian housing tent. Both his children attend a local kindergarten while his wife works as a private businesswoman. He operates an accessories retail sales business in a stall in Bayanzurh, an indoor market, in Ulaanbaatar. He started his business in 2007 by selling a variety of pendants and accessories made of stone. His daily profit is between 60,000 and 100,000 MNT. Ganchuluun imports his products from Beijing and Shanghai, China's two biggest cities. Over the years, he has built a stable and successful operation and has gained much experience as a businessman. He wants to expand his business and open another stall where he will sell a variety of stationary. He is requesting a 2,700,000 MNT in order to increase his working capital.