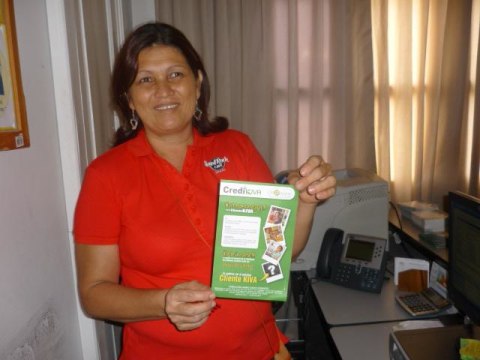 Amira Luz's loan finished fundraising, but these other borrowers need your support

Amira R. and her husband have worked hard at their business they started after her brother-in-law suggested they establish a retail outlet selling products from their home. They were able to stock their business using the first few loans they received from Fundación Mario Santo Domingo, an organization that has helped them make adjustments to their store, increase their sales, and provide an education for their children. Amira’s retail business is situated in a good location, but this is not the only activity in which she is involved. She also prepares turnovers, “arepas” (flat cornbread stuffed with various fillings), and fried foods that many families consume for breakfast. In addition, she offers telecommunication services from her store provided through SAI, which was the original product she provided through her business.

Amira says she started her business because she did not want to perform household chores all day and then sit around with her arms crossed while waiting for her husband to bring home a paycheck. She is a hard worker who wakes up at 4am to prepare the cornmeal. By 6am, Amira and her mother begin selling fried foods. Later in the day, she organizes the merchandise that her husband and an employee have to deliver to their customers. They have two pushcarts that they use to transport goods through the streets of Soledad. Amira has more than 500 customers, so she has to prepare the same number of invoice cards that state the customer’s name, the amount that has to be collected each week, and the list of products that have been delivered over the long term. Her dream is to have several retail outlets and a large warehouse. She currently wants to prepare for the year-end season when she sells more merchandise such as toys, small appliances, and clothing. For this reason, she plans to use her Kiva loan to stock these items. Her greatest challenge is the high level of competition in the area, so she wants to sell what her customers need.