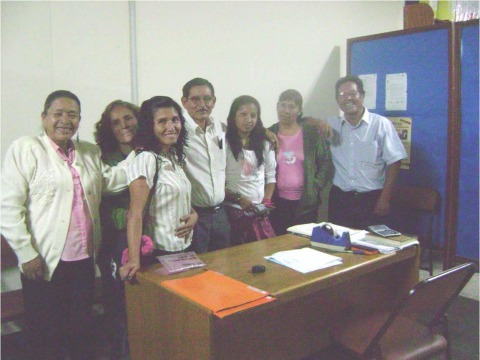 The Communal Bank “Unidos al Futuro” (United to the Future) consists of eight members who seek to make progress in their businesses.

Fausto is 60 years old and has been selling clothes from a young age. He began buying merchandise to increase his capital and thanks to the work he has accomplished, he now has his own vending stand. Fausto is a person who through his work provides not only education for his children, but also food, clothing, and other comforts. By selling his products, he was able to buy land and begin the construction of his house. He says that when he worked as a street merchant he walked around with a bag full of merchandise and was able to sell his products. Despite everything that has happened, Fausto was able to move forward with dedication and effort to achieve what he had always hoped for – to give his children the chance to pursue a profession.

This recent loan will be used to increase his operating capital so that he can restock with more merchandise.