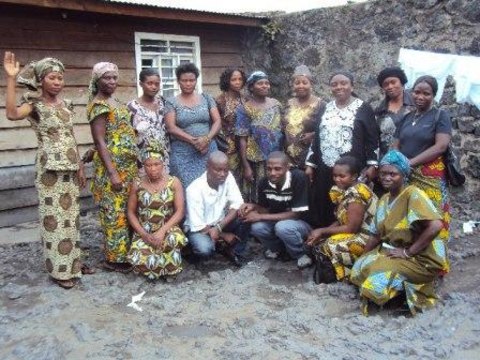 Mauwa M. is the president of the Zamiri Group. She is 38 years old, has eight children, and her husband is a security guard. Her eldest son is 17 years old, the youngest is three, and all but the youngest are in school. She has been running her business for 17 years. She began with about $100 that she received from her husband. She sells sugar, Omo soap, rice, etc. She displays her merchandise in the central market of Virunga. This loan will allow her to increase her turnover by purchasing ten bags of rice, five bags of Omo soap, etc. The biggest challenge is that she sells in the national currency (Congolese francs). Because this Congolese currency is not stable, she is subjected to more and more inflation, which leads to a loss in exchange with foreign currency (dollars). She is like many Congolese who fear the Congolese franc and instead keep their savings in dollars. She would like to buy a small plot of land on which to build for her children. As a client, Mauwa M. thanks Hekima for its actions to help the poor citizens who are excluded from traditional banks. One should note that the Zamiri Group has 15 members.