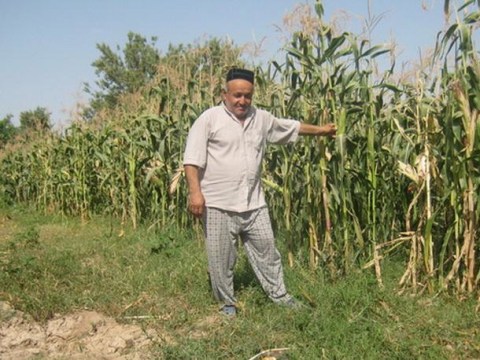 A loan helped To purchase seed and fertilizer.

Abdugafar I. is married and the father of three children. He is a farmer. Educated up to the secondary school level, he had to quit school because he couldn't afford to attend. Abdugafar has a good work ethic. He has wholeheartedly committed himself to agriculture. Thanks to his hard work, he has today become a man known for his determination and serves as an example and reference for other farmers. He has been growing wheat, onions, melons and watermelons for the past twenty years.

Abdugafar is now seeking a loan of 10,500 TJS to buy seeds and fertilizer so as to be prepared for the upcoming season and so produce a good harvest. He can then better meet the needs of his family and improve his working conditions.

More about Tajikistan and IMON International:

Tajikistan is known for its rich place in history, which includes a key post along the Silk Road and the farthest reach of Alexander the Great's rule. It has also produced great thinkers, philosophers, scientists and poets, including Rudaki, Avicenna, Ferdowsi, Omar Khayyam, Jomi, and Rumi. The country is home to communities that still speak the ancient Sogdian language, epic mountain passes and a civilization that dates back to the 4th millennium BC. Today, it is a complex mixture of the Islamic faith, Soviet culture, New West culture and Central Asian traditions.

But Tajikistan is also the poorest of the former Soviet republics. The civil war, which ignited soon after its independence from the U.S.S.R., further damaged its already weak economy. In addition, 93% of the country is mountainous, and only 7% of the land is arable. These conditions have resulted in high levels of unemployment and have forced hundreds of thousands to seek work in other countries, mainly Russia. While the people of Tajikistan are working to improve their agricultural production and manufacturing sector, nearly two-thirds of the population still live in abject poverty.