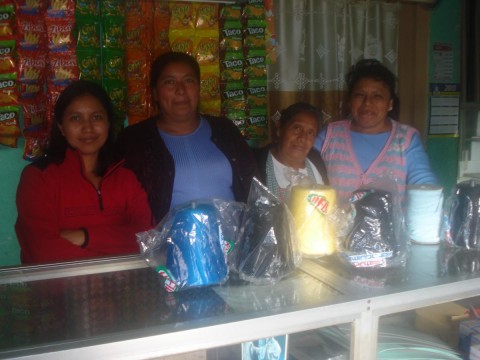 History of the group named "La Alameda" Marlena T. V. is originally from Momostenango in Totonicapan but she now lives in Chimaltenango in La Alameda. She is thirty three years old. She has two daughters who are currently attending public school in La Alameda. She came to live to Chimaltenango because in her village there was no business. She sells traditional clothing and cosmetics. Her business is run from her home but she also sells door to door. She once belonged to a different group but they were not successful so she joined this group instead. Vidalia U. A. is originally from Chimaltenango. She is 58 years old and she sells firewood. She has been running this business for the past 5 years. She has 13 children but only three of them are still dependent on her. The others are married. Her husband helps her with her business. Sometimes she receives a large quantity of firewood and she can't manage it on her own. Her kids also provide her with their support. Monica Orfelina T. V. is originally from Momostenango but she now lives in Chimaltenango. She came to this region because in their village there was no business. She knits baby clothes. She has four years' experience in the business. She also works in the Antigua hospital and it is there where she sells most of her products. Catalina L. A. is originally from Jilotepeque. She lived a long time in Comalapa and was part of the group named "Comalapa's Workers" but she had to leave the group when she moved to Chimaltenango. She got to know the new area and she joined this group, having had good references from the previous one. She says, Thanks to God her business has helped her survive. She built a house in the colony of La Alameda in Chimaltenango. She sells general products of every day use.