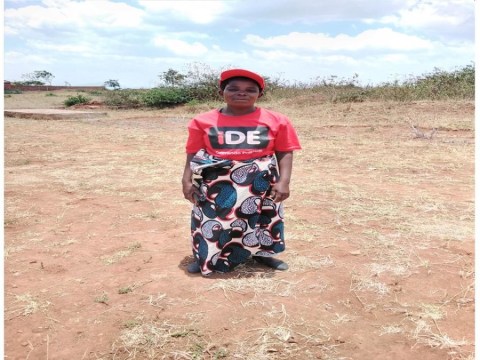 A loan helped to buy more Iris potatoes and common beans to sell to increase her income.

Nalesse is a 44-year-old Mozambican woman who lives in Tsangano, Tete province. She is a domestic woman, as many others in her village. For many years she has been working at home, taking care of her four children while her husband works outside the home.

Initially, Nalesse would practice farming just to feed her children. Her main crops are veggies such as Irish potatoes, kale, onion, and tomato, as well as grains such as common beans, peanuts, and maize.

In 2019, Nalesse had a chance of attending one of the iDE Mozambique trainings named Farmer Field School where she gained new skills to improve her agricultural productivity as well as to access new markets. From that time, the production of her crops has had a commercial purpose. After the training, she was able to create a good network of both producers and buyers.

Nalesse intends to acquire more crops from other smaller farmers, considering the increase of the demand in the next months. This is why she is requesting a Kiva loan to buy more Iris potatoes and common beans to sell to increase her income.