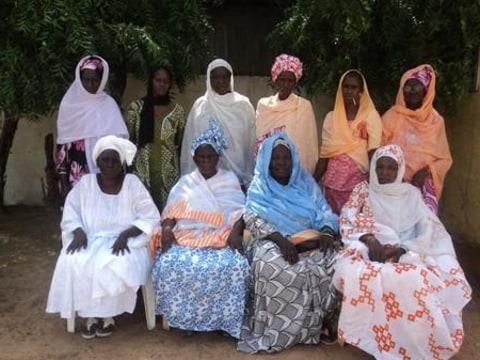 And Liggey Group's loan finished fundraising, but these similar borrowers just need a little more help to reach their goals!

The solidarity group And Liggey was created on December 4, 2007. It is made up of 10 women who are all from the same neighborhood. These women know each other through friendship and neighborly relations. Mrs. Sigama C., standing on the right in the photo, wearing an orange scarf and glasses, is the group's leader. She is 65 years old. She is a widow and has 8 children. She is also in charge of her 4 granddaughters because her children don't have steady jobs yet. She fattens cattle, she buys them and fattens them for at least 5 months before reselling them. She has been doing this for more than 25 years. Her children help her with her work. Her goal is to take care of her personal needs and support her granddaughters. Son objectif est de prendre en charge ses besoins personnels et soutenir ses belles filles dans les charges familiales.