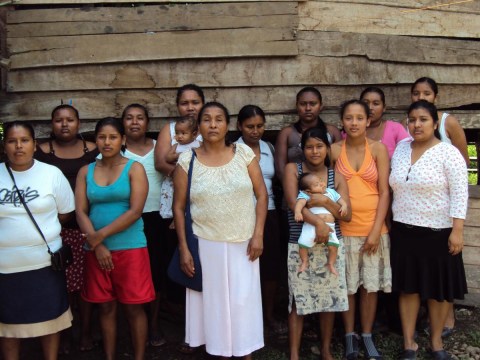 The Women's Bank "god Is With Us" Group

The Women's Bank "god Is With Us" Group's loan finished fundraising, but these other borrowers need your support

A loan helped To purchase animal feed and nutrients for bananas and plantains.

The Women's Bank "god Is With Us" Group's story

The Women’s Bank “God Is With Us” is a group of 13 women who live in Shiroles, Limon, located in the Caribbean region of Costa Rica. The loan consultant who has been working with these women describes them as a hard-working group with a common goal of improving the standards of living in their individual homes as well as their community at large. All these women are motivated to contribute in a meaningful way to the family income. The group is formed of family members and friends who know one another on a deep and personal level, having lived the majority of their lives in the same, tight-knit community. In this particular community, the density of communal banks is high. This is due to the reputation Fundacion Mujer has garnered with community members over the years, and the subsequent promotion of our lending model through word of mouth. The women of this group are engaged in various agricultural activities, on which they rely as a source of income to support their families. This loan will be used for general investments in agriculture, which will improve crop yields or support the rearing of animals. Many of the group members, including Shirley, Ada R. and Digna, produce bananas and plantains. As a result, this loan will be used to invest in the purchase of seeds, nutrients, vitamins, and hired labor in order to perform physically strenuous tasks, such as harvesting and the transport of produce. The bananas and plantains produced by these women are either consumed or sold to members of the community as well as exporters who travel to Shiroles in order to purchase in bulk. With respect to the rearing of animals, some of the group members are in the pig rearing business. For these members, the loan will be used to invest in animal feed in order to ensure a quality pork product to customers in the community. Grace R. H. is the treasurer of this group. She lives with her husband and son in Shiroles. Grace will use this loan to purchase nutrients to feed her pigs. A busy entrepreneur; Grace organizes her day in the following manner. She wakes up early in order to get a head start on household chores (preparing her son for school, cleaning the house, preparing breakfast etc). When those chores are finished, she feeds the pigs and after that, she goes to work. Grace's goal is to increase the production of pork. She wants to increase her income from pork sales in order to achieve financial independence and be able to dedicate more resources to her family. Grace says that a major obstacle she faces is the high prices for animal feed combined with the low market price for pork meat. Grace has also found it difficult to secure a constant buyer for her produce. Grace says that because the members of this group are all family or neighbors from the same community, they can learn from each other and support each other in their businesses. She says the name of the group signifies that God is at the center of everything the group takes part in and is “always with us.”