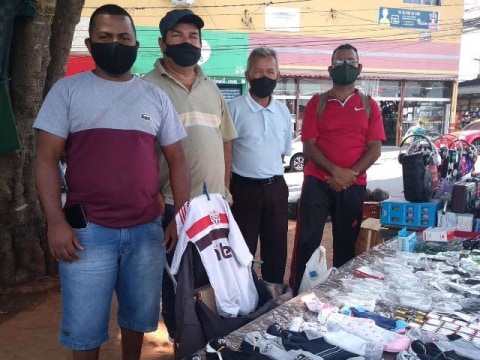 A loan helped to invest in sheets of rubber for cutting out flip-flops.

Jose (red shirt) is married and is the father of one child. He lives in a rental in east São Paulo, an urban area with a large population.

He works selling seasoning packets and flip-flops as a street vendor. He does not have a fixed location, but he does have a large clientele and is well known in the neighborhood.

Today, his business is his family's sole source of income. He is very dedicated and works hard at what he does. He used to work only with seasonings, but his outlook changed when he connected with Banco do Povo, because with those resources he was able to buy machinery for cutting sheets of rubber. That was how he began making his own merchandise, increasing his profit margin and adjusting production according to demand and customer orders.

With this loan, he plans to invest in rubber sheets for cutting out flip-flops, increasing production.

His objective is to open a commercial space and move off of the streets.