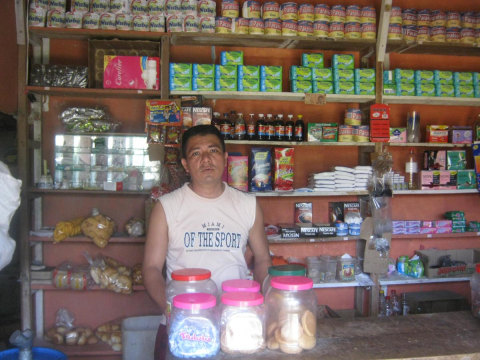 Mauricio N. is a resident of the town of Baranoa, in the Atlantic region. He works in business in a store that is very well known in this area, where he sells provisions, meals, liquors, and soft drinks. He began as an assistant in this same business, and since its long-time owner needed to travel to take care of his property in the Magdalena region, Mauricio stayed in the store through a lease contract. In the year 2005 he bought the store and succeeded in positioning himself in the market; this he did through much discipline, good service, and saving, and this success filled him with great satisfaction. Indeed, with his great sense of responsibility, Mauricio succeeded in obtaining several loans through the Mario Santo Domingo Foundation. They have helped him a lot, since before he worked with very little capital to stock his store. Recently he has benefited from Kiva loans, and this would be his third loan from this organization. He needs the loan to buy larger quantities of oil, rice, and liquors to prepare for the end-of-year fiestas that are coming. With this loan his store is going to be well stocked. His business is his only source of income and for this reason he focuses his efforts on the growth of his store, since he dreams of seeing it fully furnished, well provided with glass cases and shelving, but always well stocked, so that he has everything his customers want when they arrive at his store.