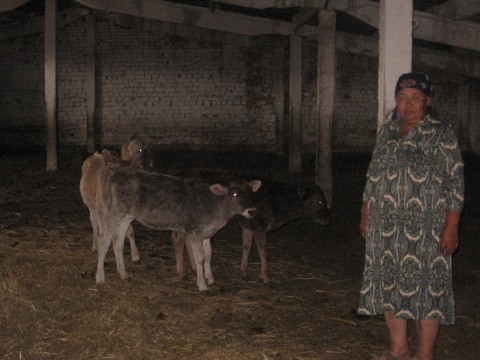 Mamlekat's loan finished fundraising, but these other borrowers need your support

Mamlekat T. is a 53-year old widow. She was born in a family of farmers and from early childhood had to help her parents in farming. Mamlekat got married at the age of 20 and gave a birth to two sons. She moved to her husband’s home in Stepnoe village, where they lived with his elderly parents. Her husband worked on a large state farm where Mamlekat got a job of dairymaid. He helped her in all her activities. Later, they were able to buy a small house in Kara-Balta town (near the village). This couple worked hard to support their children. But in 1987, Mamlekat lost her support when an incurable disease caused her husband death. She became the only breadwinner for her family. Mamlekat, being courageous woman, remained firm in her wish to provide a good future for her children. Her salary didn’t cover all her family’s expenses, so she decided to start her own business. In 1999, Mamlekat sold her house in the town and bought a dairy yard near her Stepnoe village. At that time, Mamlekat had only several calves, later her livestock grew and she got milk cows. Mamlekat’s family had revenues from selling their dairy products. Today, Mamlekat has ten milk cows and ten bull-calves. Now Mamlekat requests a loan of 60,000 Kyrgyz Soms to enlarge the number of cows. It will allow her to further develop her business. Two years ago, Mamlekat’s elder son married and moved out. Using the revenues, Mamlekat plans to help her younger son, who lives with her, to buy a house in Kara-Balta town. Bai-Tushum and Partners uses Kiva funding to target the especially vulnerable population. Bai-Tushum and Partners is one of the leading Microfinance Institutions in Kyrgyzstan. As a reliable financial partner, Bai-Tushum contributes to the economic development of the Kyrgyz Republic through the delivery of microfinance services in rural and urban areas that lead to increased employment and meet the interests of its clients and investors.