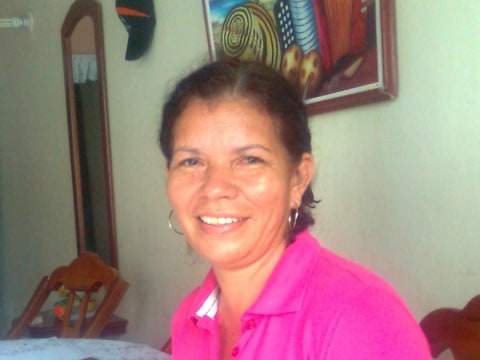 Judith Erlinda L. is 49 years old. Her family consists of her husband and three children who are between the ages of 20 and 26. She lives in the April 7th neighborhood in the city of Barranquilla. Judith sells various types of food and merchandise such as whey, cheese, sandals, backpacks, sweaters, and undergarments. She is from San Jacinto in the Department of Bolívar, but when she was 24, she moved to Barranquilla because of the city’s history. Thoughts of her hometown remained in her mind and her heart, so she began selling products made by its people such as non-food bags, sandals, backpacks, and foods such as cheese and whey. Even though it has been a long time since she first moved to Barranquilla, Judith still remembers the moment when she arrived in search of new horizons. She began working at uncle’s bakery. After getting married, she became a full-time homemaker but her enterprising spirit pushed her to develop her potential by starting a business. At the moment, Judith intends to keep her business running into the future.

This is the first loan she has requested from Fundación Mario Santo Domingo. Judith plans to remain connected with her birth city of San Jacinto by purchasing bags and backpacks that are manufactured there and bringing them to her customers in Barranquilla. In addition she will bring back with her clothing for women, men, and children.

Her goal is to obtain several loans from Fundación Mario Santo Domingo to increase her inventory, which will be a great help in paying the household expenses. At the same time, she will be able to generate more income that will allow her daughter to finish university and enable her son to build a home so that his family can live independently.