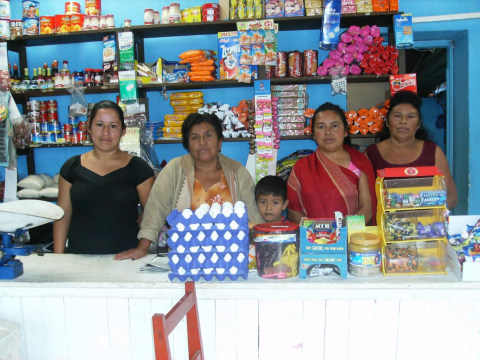 A loan helped to buy merchandise to stock her store, such as: sugar, beans, pasta and other items.

Robeth P. E. lives in Coapilla in the state of Chiapas, Mexico. She is 58 years old, and is married to Alfredo S. P., and they have 3 children who are now married. Robeth has had a grocery store for 10 years, and she tells us that the business is going very well. With the business, she has been able to get ahead by earning income for her home. Even so, she counts on the support of her husband who works every day in the fields, and when he has time he helps her to attend to the store. She was motivated to go into this line of work by her prior work experience, since she worked in a convenience store for about 8 years. She comments that at first she was anxious about having her own business, but "today, thanks to God, I've managed to spend the days doing this work which gives me good results." With the profits she wants to save to expand her business and buy more merchandise to better serve her customers. Robeth formed a group as a result of an invitation that was made to her by one of the FRAC workers, and it interested her very much. She discussed it with her associates, and they gave the group the name "Pomarrosa" because it is named after a fruit of the same name. The other members of the group are: Julia C. Pérez, who sells chicken that she seasons in her own house, Blanca Míreli, who will use the loan to buy ingredients to make bread, and Olga Lidia, who makes dresses, skirts, blouses and pants.