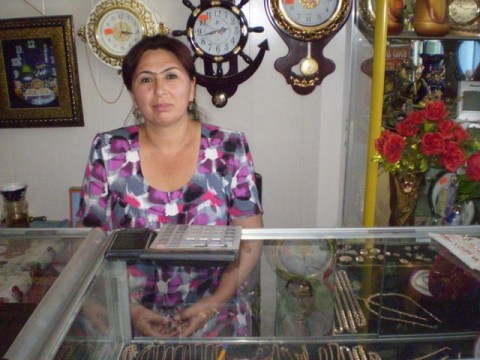 A loan helped To purchase new items of jewelry for sale.

Forty-two-year-old Salomat T., who is married with three children, has been selling jewelry in the local market for the last 15 years. The national earrings, rings and bracelets are very beautiful and popular in Tajikistan, with most women in possession of at least one set of jewelry, usually inherited from their grandmothers.

With many clients, Salomat's business is rather successful, generating a stable income for the family. She is now requesting a loan of 9000 Somoni with which to purchase new items of jewelry to increase her range of goods for sale. As a client of IMON for four years already, Salomat has proven herself to be a reliable client. She thanks all for their support and promises to repay the loan on time.

More about Tajikistan and IMON International Tajikistan is perhaps best known for its rich history, which includes: its role as a key post along the Silk Road; the end of Alexander the Great's rule; and its famous great thinkers, philosophers, scientists and poets including Rudaki, Ibn Sina (Avicenna), Firdousi, Omar Haiyam, Jomi, Mavlavi Rumi and many others. The country is home to communities that still speak the ancient Sogdian language, epic mountain passes, and a civilization that dates back to the 4th millennium BC. Even today, it is a complex mixture of the Islamic faith, Soviet culture, New West culture and Central Asian traditions.

However, Tajikistan is also the poorest of the former Soviet republics. The civil war, which ignited soon after its independence from the U.S.S.R., further damaged the already weak economy. In addition, 93% of the country is mountainous, and only 7% of the land is arable. These conditions have resulted in high levels of unemployment, forcing hundreds of thousands to seek work in other countries, mainly Russia. While the people of Tajikistan are working to improve its agricultural production and manufacturing sector, nearly two-thirds of the population still live in abject poverty.