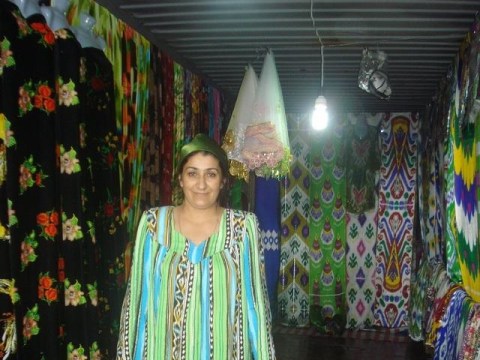 A loan helped Purchasing new fabrics in order to increase the range of goods for sale.

Javzbegim A., 39 years old and married with two children, sells fabrics for sewing the national dresses. In business for three years, she has very good taste and is always ready to advise her clients about the appropriate textile to choose for any occasion, two reasons she has many customers. Moreover, Javzbegim’s fabric prices are attractive for various levels of the population as she has a wide range of goods for any taste and any budget.

The income that she derives allows her to educate her dear children, and she hopes that she can continue to provide for them so they can receive an adequate education. Now Javzbegim needs $1500 USD to purchase new fabrics in order to increase the range of goods for sale. She promises to repay the loan without any violation and expresses her gratitude to everyone supporting her.

More about Tajikistan and IMON International Tajikistan is known for its rich history, which includes its role as a key post along the Silk Road and the end of Alexander the Great's rule. It has also produced great thinkers, philosophers, scientists and poets, including Rudaki, Avicenna, Ferdowsi, Omar Khayyam, Jomi, and Rumi. The country is home to communities that still speak the ancient Sogdian language, epic mountain passes, and a civilization that dates back to the 4th millennium BC. Even today, it is a complex mixture of the Islamic faith, Soviet culture, New West culture and Central Asian traditions.