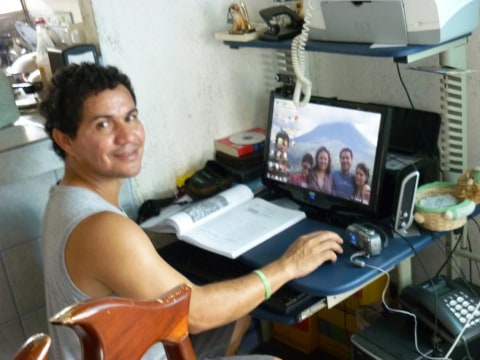 A loan helped To buy a computer.

Mr. Hayder S. R. is a 40 year old man who lives with his wife and 4 children in a community called La Palma de Puerto Jiménez in the province of Puntarenas. For many years his town has worked in goldmining and lumber until the national park Corcovado was created. Together with its beautiful beaches, they have opened up the tourist industry and today it is the most important one of the region. Hayder spent his whole life in the lumber industry until the regulations from the establishment of the national park put a stop to the cutting of trees in the forests of Puerto Jiménez. Thanks to the experience he had from his work, his good attitude and the wish to keep getting ahead, he obtained a post in the Department of Protection of Natural Resources of the Corcovado National Park. HIs job now is to protect the forest that his family damaged for years. His good performance at work allowed him to win a scholarship so that he could finishe his secondary education and obtain an administrative position in the same are in which he already works. That is why Hayder is asking for a loan of ¢500 000 (five hundred thousand colones) to buy a computer, which he needs urgently for his studies. He will also use it to rent out during the day to tourists in the area. Mr. Hayder S. R. is a member of Raíces Capitales S.A, one of 100 member organizations of EDESA in Costa Rica. This will be his second loan and with it he hopes to continue growing personally and financially.