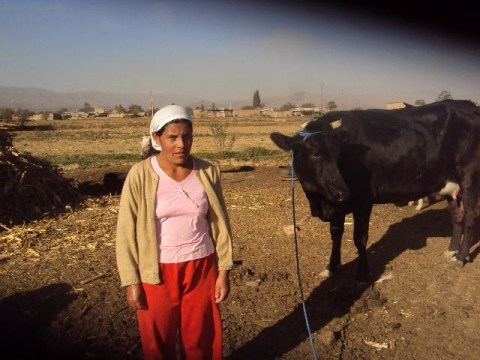 A loan helped To buy a milk cow.

Rosario C. is 28 years old and lives in Maica Sud, outside the city of Cochabamba, in Cercado province. Rosario has 2 children, age 5 and 3. Her husband is working in Chapare, which is part of our city. She has been dairy farming for 8 years now, and her husband also works in agriculture. Rosario only finished primary school, because her mother died when she was 2 years old. Being the only girl among a family of brothers she took on the responsibility of bringing up her brothers after the father left them. They had no idea how or where to find him, so Rosario went out to work so that her brothers could get by and could finish their education although she could not. Rosario starts work very early at the dairy, on her own. Morning and evening, she has to milk the cows and take the milk to the vats in Maica. At the same time she looks after her children. Rosario needs the loan to buy a cow, to increase her milk production and her income. In this way she hopes to provide a better future for her children and her brothers, whom she still has to help out until they finish college. Rosario is a very responsible and hard-working woman, for which her husband is extremely proud of her. Rosario dreams of a better future for her children. She hopes her daughter will have the opportunity to study for a degree and, with it, be able to help local people. Rosario is much-loved by people in Maica for being such a good neighbour who is always ready to help anyone in need.