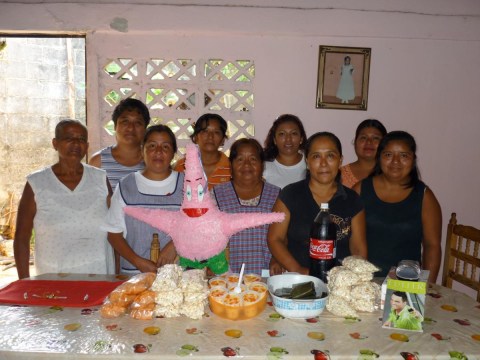 A loan helped Buy ingredients for her products, such as sweets and seeds to make popcorn to sell outside the school.

Ymelda L. lives in San Juan Bautista, Tuxtepec, Oaxaca State. She is 56 years old and has 3 children. She lives with her daughter, who is 14 years old and attends the local secondary school. Ymelda's other two sons have already left home. From Monday to Friday she sells popcorn, pork rinds and sweets outside the secundary school her daughter attends. The activity has enabled her to support her three children. Her husband left for Tijuana 12 years ago to work and support his family but he never came back and forgot about them. Ymelda started off by working in shops until she saved enough money to set up her own grocery business from home, but due to the competition she lost her customers and her shop. She then decided to invest in a different line of business and started to sell pork rinds and popcorn. She sells a bit of everything. On Saturday and Sunday, when there is no school, she makes stuffed chiles and sells them in town. She uses a tricycle to transport materials and produce to sell. She requests the loan to invest in ingredients such as seeds to make popcorn, dough to make pork rinds and sweets. She would like to have a fixed business rather than be out and about as it is dangerous. She hopes to continue in this line of business because she wants to improve her house, which at the moment is largely made of cardboard. She would like to thank Fundacion for having trusted her and sent through her loan request, alongside those of the remaining members of the group. The 11-person group is called Gardenias because the patio where they meet is surrounded by flowers of this kind and their pleasant smell caught their attention. The other group members are: Patricia V. C., who learnt to make piñatas and handicrats for parties two years ago and has had her own business since; Irene Cabañas H., who makes snacks in her home on Saturdays and Sundays; Maria Luisa C. J., who also makes snacks; Melissa G. V., a young girl who started a business from home selling ice lollies and jelly; Mercedes C. V., who raises and sells pigs; Felicitas G. S., who sells shoes to her friends through a catalog and is getting orders in every week; Benita I. C., who sells clothes to her friends; Angela S. G., who sells sweets outside her home and tamales to her friends; Silvia H. L., who sells snacks in the school from Monday to Friday; and Elda V. F., who sells shoes through a catalog. The Gardenias Group aims to be always on time with their payments and to keep on working as they have done until now. Although some of the members are on their own, with no help from anyone else, they support each other as friends and are glad that Fundacion is also on their side.