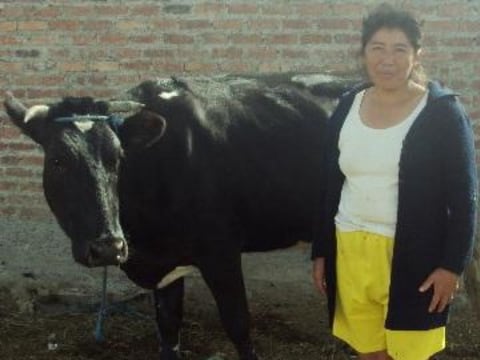 A loan helped to buy soy husk (to feed her milk cows).

Ms. Benedicta V. is 39 years old and is married to Mr. Ronal Ortiz. They have three children, ages 7, 5, and 3. She lives in the community of Sumunpaya, in Colcapirhua, in the Department of Cochabamba. She works in the production of milk and fresh cheese. Benedicta is a very hard-working person. Two months ago, she had an operation for varicose veins because she could not walk, as it affected her feet. Her husband, Ronal, decided it was at the point where she needed to have the operation so that she could get better, to care for their children and to guide their education. However, their milk and cheese production has really fallen during her recovery, because her husband has another job and can't dedicate himself to their dairy business. Benedicta has done the best she can, with the help of her son. Now that she is able to work more, Benedicta is requesting this loan to buy soybean husk to feed her cows. If she provides the cows with nutritional food, they will produce more milk and she can increase her income. This would allow her to help with the household expenses and to pay for her children's education. She dreams that her children will have a better future, be able to finish high school, and become professionals. Benedicta imagines that her daughter would make an excellent doctor, and in this way could help low-income people, especially the children of their community.