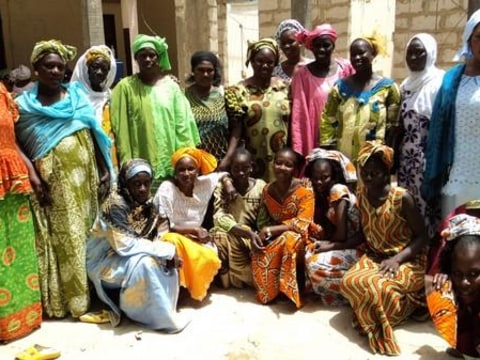 A loan helped Strengthen the business activities of group members.

The DOLELE group is one of the solidarity groups of the RANDOULENE SUD "Banc Villageois." It is made up of eighteen women, all from the same neighborhood. They are all married and the mothers of at least two children, with the exception of Lobé M. (group leader); however, she is entirely responsible for one of her nephews, who is in school. The women of the group are between 21 and 40 years old, with the exception of the first four standing on the left, who are in their forties. They are developing diverse businesses, such as sales of clothing, cosmetics, and fishing supplies. Others raise poultry and fatten sheep. For reasons related to the health of her child, Mrs. Adji Aïda M. could not be present for the photo. She is assistant group leader; she is 21 years old. She raises poultry and fattens sheep, and she is assisted in her business by her husband. Miss Lobé M., second from the right on the front row and also in closeup, is the group leader. She is the youngest of the group, but she became group leader thanks to her diligence, dependability, and understanding of community spirit. She is 21 years old, single, and childless, although she supports her sister's son. Since joining the "Banc Villageois" in 2009, she has been selling perfume. Her new loan will allow her to develop and market her business. Her goals are to build her savings level and to pay her personal expenses, as well as those of the child she supports.