Today only: Sign up to lend monthly, get $50 for lending! 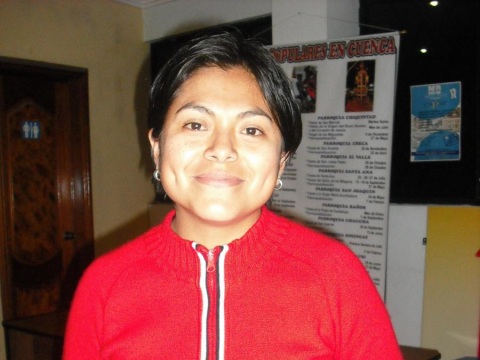 Sra. Nelly V. has been a member for three years and was invited by her mother-in-law to join this great group of enterprising women. She lives in the Feria Libre section of the city of Cuenca, the capital of Azuay. Cuenca is well-known for its beautiful architecture, its people, its cuisine, and was named a World Heritage Site for Ecuador in 1999.

Nelly is a member of the Communal Bank “Fe y Alegría” (Faith and Joy). She is 28 years old, married, and has given birth to four children who are now 9, 8, 7, and 3 years of age. Her first two children attend school in the city. Nelly’s husband is a merchant who sells audio and video CDs. They do not have a house of their own, so they live in a rental property.

Nelly is a shoe merchant and has been in this line of work for four years. She has her own vending location at the Feria Libre Market. Nelly only works on Wednesdays and during the rest of the week, she takes care of her daughters who are still very young.

This new loan will be invested in more shoes so that she can expand her business. Her goal is to move forward together with her family.