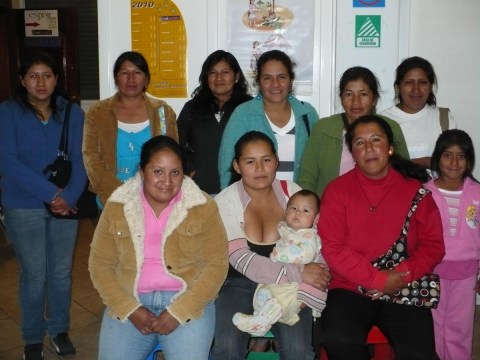 The Communal Bank “Mi Bankito” (My Little Bank) consists of eleven members who struggle day after day in their jobs so that they can get ahead and grow alongside their families. They live in the community of Aguacate in the city of Cuenca, which is known for its beautiful architecture, its people, its culture, and its cuisine.

Sra. Fanny León lives in the community of Guagunchi, which is part of El Valle Parish. She is participating in her second loan cycle. Fanny was invited by her sister to become part of this Communal Bank made up of determined and enterprising women. She has has been operating her own workshop for ten years. Fanny works from 8am until 6pm making jeans. She has employees who work for her and help grow her business.

Fanny is 36 years old, married, and has three children (ages 16, 13, and 10) that resulted from her relationship with her husband. Her oldest child dropped out of high school because of a few problems, but he plans to return next year. The second child currently attends high school and her youngest daughter is in elementary school. Her husband works in the family business. Thanks to their mutual efforts, they were able to build their own home. With her new loan, Fanny plans to buy fabric and materials for her workshop. Her goal is to continue growing her business.

Sra. Gladis A. lives in the community of Aguacate. She is 40 years old, married, and has four children who are currently 20, 19, 18, and 17 years of age. Her oldest child attends the university. Her second daughter had to quit school after she became pregnant and is now in a common law marriage. Her third child is married and lives independently. The youngest child is a high school student. Her husband works as a crane operator. As a result of both of their jobs, they were able to build their own home.

Gladis has worked the past eight years providing housekeeping services at a residence. She only works half a day and spends the rest of the time caring for her child. There are times when she also does laundry for other people. Gladis is participating in her second loan cycle and was previously part of another Communal Bank group. The loans have been a great benefit because they have provided financial stability to her household and the payments are simple to make. Her new loan will be used to pay the bill for the computer that she acquired to help with her children’s studies. Gladis hopes to have her own business so that she does not have to depend on other people.