Amazing! Our lenders funded ALL U.S. loans to women today. Sign up to lend monthly to U.S. borrowers here. 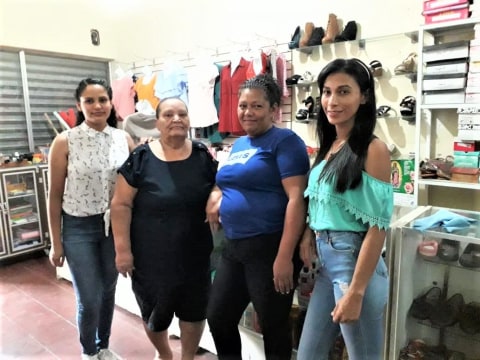 Norma is 68 years old, married, and the mother of four children. She began her business when she got married because her spouse worked at an electric plant and she spent all day at home. Then, she decided to sell small items and it occurred to her that, since she was near schools and an institute, to bring in school products and clothing.

Later, with time, she began to invest in clothing, shoes, and other miscellaneous items. Now she has her shop with a good variety of products. The only help that she has had is from her spouse and, currently, that of her daughters who are abroad. She has had several businesses such as selling clothing, stationery items, shoes, and now Nicaraguan tamales, and she has other income from her spouse's pension, which is a steady income.

She asks for a loan from FUNDENUSE with Kiva funds to invest in the purchase of clothing, shoes, and school supplies such pens, notebooks, erasers, markers, colored pencils, coverup, etc. Her plans are to be able to grow her business.

She belongs to the Divina Misericordia San Isidro solidarity group with Nereyda, who works selling clothing, Mercedes, who has a store, and María, who sells shoes.