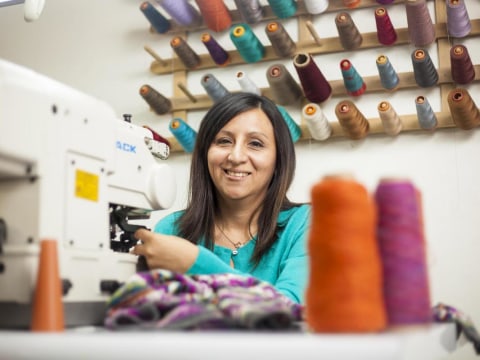 A loan helped to invest in a bulk purchase of pure alpaca yarn and alpaca blend yarn.

Ana is an artisan from Peru, who specializes in knit alpaca clothing and accessories. She would like to invest in a bulk purchase of pure alpaca yarn and alpaca blend yarn.

Ana has been selling through NOVICA since 2013. This is her story:

"The year 2020 has brought challenges for everyone. In the case of the textile workshops in Peru, one of the challenges has been yarn suppliers, who have lowered their production to almost 50% compared to previous years. This generates competition among the textile workshops to get the raw materials, since those suppliers give preference to the ones who pay in cash. Despite this, it has not been a bad year, because thanks to my sales, I have managed to keep my workshop. I have the same number of employees that I had last year, and that fills me with pride. Even so, I need to have that boost to continue producing the orders for our customers. I am also developing new collections."

Use the link below to view Ana's knit alpaca clothing and accessories on the NOVICA site: