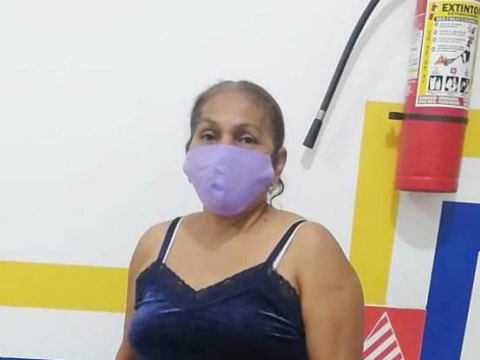 A loan helped to buy food supplies and disposable food containers for her business.

Elva Maria, 59, is in a common-law marriage and has 5 children who are grown and independent. Her partner is a woodworker, and they live in their own home. They live in the city of Bahía, which was affected by the earthquake of April 16, 2016. Now this city is rebuilding its infrastructure and businesses, and is promoting tourism. This is a resort area with beautiful beaches, where tourists can engage in a variety of watersports.

Elva Maria has a shop that she rents in the center of the city, where she prepares and sells delicious "encebollados," (a traditional Ecuadorean soup prepared with albacore or fresh tuna, cassava, onions, tomatoes, cilantro, and condiments). It is served with pickled onions and tomatoes, plantain chips, and chili peppers or spicy salsa according to one's taste.

Elva Maria works every day until she runs out of the food that she has prepared. She also sells soft drinks, beer, and water. Her daughters help her with the business. The health crisis affected her very badly at first, because she was not able to sell. But she is gradually reactivating the business so that she can continue to generate income.

Elva Maria will use this loan to buy albacore tuna, limes, onions, disposable food containers, soft drinks, water, and other items. She dreams of having her own shop and keeping her family in good health.