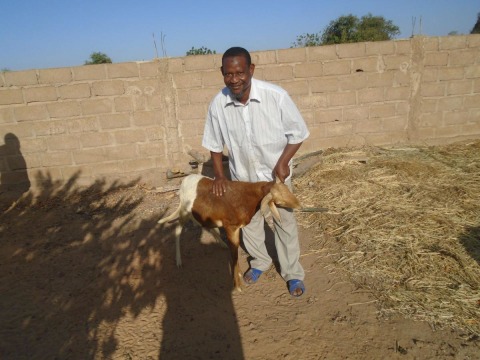 A loan helped to buy animals and other goods to sell in order to take care of his family.

Alpha Malliam is the man holding the horn of the sheep in the photo. Alpha Malliam is a trained pharmacist, educated in Mali, forty-three years old, married and the father of six. His wife is a housewife.

He is a creditworthy client of RMCR. He is engaged in the business of fattening sheep and goats and trading in pharmaceutical products as well as poultry. He is very devoted to his work and has been operating these businesses for sixteen years.

Having been confronted several times with weak finances, Alpha Malliam reached out to RMCR to better meet his needs and customer demand. He makes his purchases in villages and cities and resells in the local markets and in his village. Poor sales are the only problem which he sometimes encounters, but, in spite of everything, he feels comfortable in his business as he sees himself as a participant in the economic development of his community and the employment of youth.

His wish for the future is to have a large pharmacy, to become a big livestock producer in his area and to have greater financing to better meet the needs of his community and the future of his children.