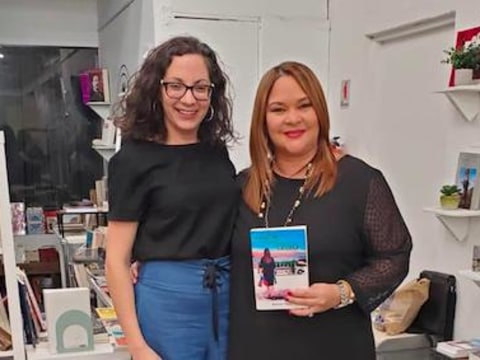 A loan helped us to publish more books by Puerto Rican authors and make alliances.

I was born in Buenos Aires, Argentina from a Puerto Rican mother and an Argentine father, which generated in me the feeling of love for Spanish-American literature. Buenos Aires is the city in the world with the most bookstore per capita, so imagine how those summer afternoons were, walking hand in hand with my parents and sometimes my grandparents along Corrientes Avenue full of bookstores. In the city of great writers, there are always discussions or dialogues regarding some cultural, literary, or simply fictional events. This leads me to remember the countless summer afternoons in which the “nonos” (my grandparents) took us to visit the theaters, parks, or any public spaces where various characters talked about rhetorical themes. Likewise, on cold nights, when our parents read stories to us, made a joke for us, or simply made up a story to appease the curiosity of their daughters. Throughout my life, I have been able to appreciate how literature brings us together regardless of the place where you are as a reader. From an early age, I was interested in reading, whether it was real or fictitious. When I moved to Puerto Rico I was able to acquire knowledge with the traditional family stories, legends, as well as my hunger for intensive knowledge. I studied Comparative Literature at UPRM, which led me to continue my master's degree in Puerto Rican and Caribbean Literature at CEAPRC. Giving me a passage between diverse writers, professors, and publishers, regarding what we know as Latin American literature. It remains for me to say that we are an accumulation of all the experiences that we go throughout life. The initial motivation arises when I coincide with Brenda Díaz, my first published writer who owns a literary work that circumscribes the various characters in Puerto Rican society. Having all these experiences, knowledge, and desire to help Puerto Rican writers, I set about creating CAT Editorial LLC.