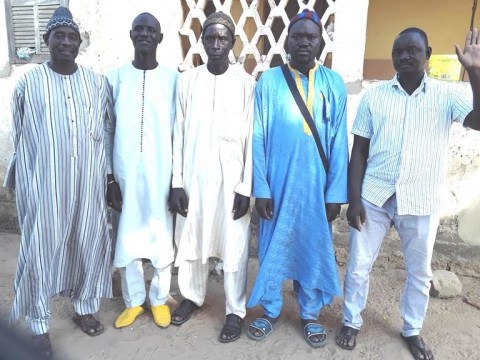 A loan helped to buy sheep for the sheep raising activity.

This group, which has existed since January 2019, is made up of five men. They live in the same village, are related and also share sure values of trust and mutual respect and solidarity. They have already benefited from one loan which was reimbursed successfully.

Mamadou, the president of the group is aged 43 years, on the right of the photo with his hand raised. He is married and the father of two boys who are at school. He is a researcher in law and preparing his thesis.

Mamadou manages a sheep fattening activity. He gets his stock in a weekly market and in the village and works at his home where he has his sheepfold. He has a good experience of 20 years in this business.

He will buy 4 sheep to raise and then sell them in the weekly markets and in the village. He does 2 cycles in a year.

His profits will allow him to buy more sheep to increase his flock since his ambition is to become a major sheep raiser.