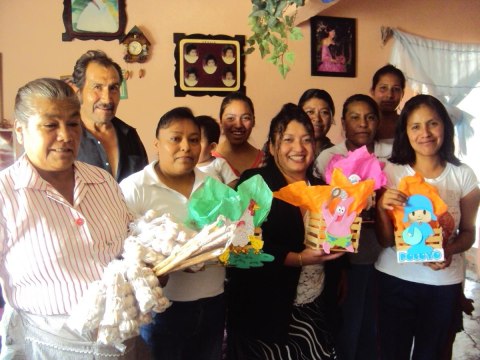 This group is called Emmanuel (which means “God With Us”) because the members believe it is important to leave everything in the hands of God. The group consists of nine individuals who live in Cerro del Márquez, which is on the outskirts of the town of Valle de Chalco in the State of Mexico. They are as follows:

Ana María Clara F. Martínez is one of the group members. Her family consists of her husband, who works as a chauffeur, and their three children who attend preparatory school, elementary school, and preschool respectively. Ana María has been selling foam crafts for a year and a half because she needed to help with the household expenses and generate a better income. She makes party favors, souvenirs, and table centerpieces based on pictures she sees in magazines since she has not taken any formal courses. Ana María sells her products to neighbors and people who have been referred to her by other customers.

With the loan she has been given, Ana María will invest in craft materials such as moveable doll eyes, craft foam, silicon, tongue depressors, glitter, artificial flowers, and other items. Her plans for the future include taking craft classes so that she can innovate and provide a better life for her children that will allow them to finish school. Using her earnings, she wants to open a store where she can display her products so that people will know about them.

The Emmanuel Group feels very fortunate that Kiva lenders are willing to help them succeed.