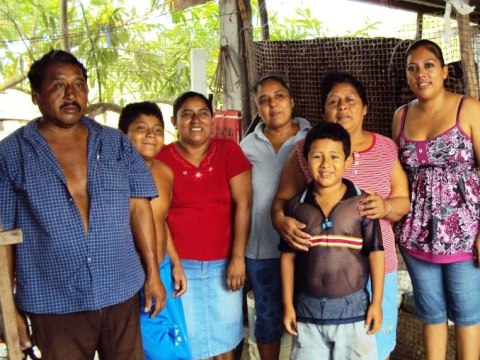 The group, “Las Gardenias del centro,” or, Gardenia from the Center was named for the affection that the members have for this flower. It is made up of four women and one man. They are represented by Maria, who has two children (who are in the photo). She works selling soft drinks of various flavors, ice, popsicles, and tortillas that she sells from her home. Rosa has two children and works selling from catalogs. With this loan she will order from Villahermosa [a mail-order company]: sheets, blankets, towels, etc. Rosario has two children, her business is raising chickens and she has a chicken coop behind her home. Gloria's children no longer live with her. They have a small store in their house. They will buy eggs, sugar, soft drinks, salt, chips, cookies, milk, soap, and bleach. Mary Cruz has two children and also has a store. Charo, as he is known, is the only man in the group. He needs this loan to buy chickens, feed, an vitamins. He sells the chickens both seasoned and still in their feathers. In addition to this business, he also works as a mason. This is work he does during the week in order to have income that helps him to pay for his children's schooling. He did not have the opportunity to go to school and as a result does not want history to repeat itself with his children. They are a very united, happy, and friendly group with many different businesses. The group is like a family and they have known each other for many years. They would like to thank the Foundation and Kiva in advance for their support and for believing in them and offering this loan.