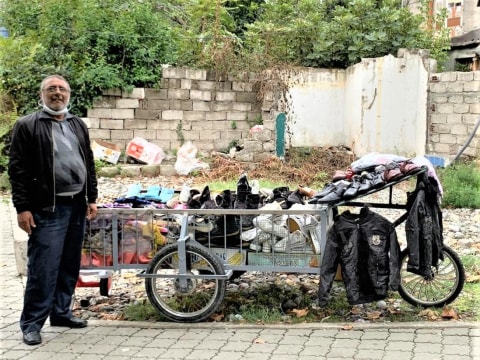 A loan helped a member from the vulnerable Egyptian community to pay for some personal medical clinic expenses, so he will recover his health.

Sokol is a 55-year-old member of the vulnerable Egyptian community, who is asking for Kiva lenders support, for the first time, to be able to pay for some personal medical clinic expenses, so he will recover his health and will continue his daily activities.

Sokol lives in a neighbourhood where most of the members of his community reside, in Elbasan. He lives with his wife, his son, his daughter-in-law, and his grandson. He is the main provider in his family.

"It has been more than 20 years that I have been selling different used or new clothes and shoes in city markets or just in a populated street, enough that I have space to park my self-made trolley!" said Sokol during the interview.

His wife and his son try to help him whenever they can, but Sokol is the "master" of selling.

Sokol really hopes to have your support, so he will be able to pay for the needed treatments and medication and, after, be able to continue with his normal life activities.