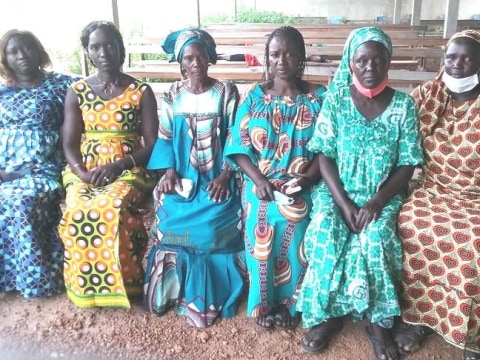 A loan helped to buy more fish for sale.

This 'banc villageois' has existed since June 2015, consists of six women who live in the same village and are linked by parentage and being good neighbors. They are businesswomen and have taken several loans, all successfully repaid.

Julienne is the group leader. She is 41, and on the right in the picture with her hand raised. She is married with five children, of which three are boys. Two boys and one girl are still at school.

Julienne runs a small business selling different fish products like smoked and dried fish, shrimp, oysters, which she buys from wholesalers and resells in her area by going door to door. She wants to buy 100kg of smoked fish, 10 baskets of dried fish and shellfish. She will pay the transport. She sells them for both cash and on credit and makes a good income.

The profits received are used to pay for her needs and also help her husband with the household expenses (food, clothing, schooling, health).