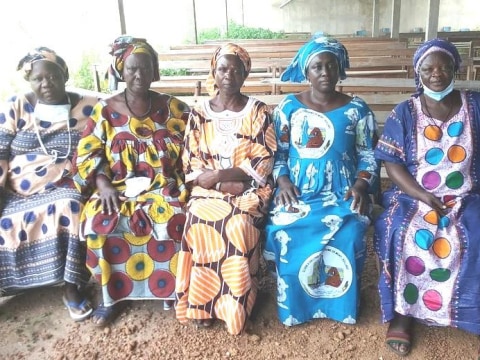 A loan helped to buy the needed products for the production of fruit juice.

This 'banc villageois' has been in place since June 2015 and connects these six women, who are from the same village and connected as parents and good neighborly relations. They are businesswoman and have had several loans which were repaid fully.

Geneviève is the representative of the group, seated on the right with her hand raised. She is a 63 years old widow, with eight children, one daughter, the other are adults and work, except the youngest one who is still schooling.

She runs a small fruit juice business. She works from home and has been doing it for five years. She plans to buy 5 bags of sugar, basins of sorrel (known as bissap), boabab pulp and the needed ingredients: she will make a good profit. She often has orders from religious ceremonies.

From the profits she will be able to help her grandchildren and save at the 'banc villageois'.