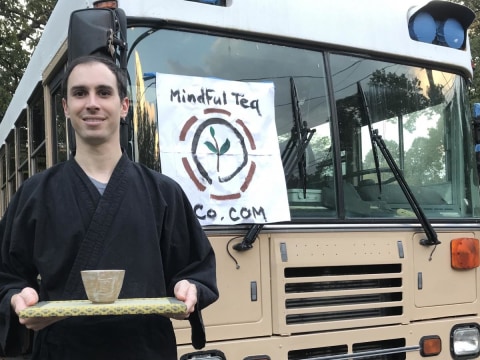 A loan helped us jumpstart mindfulness in our community, hire women and serve fair trade teas.

Elias was born and adopted into a loving family in Manchester, New Hampshire in the winter of 1990. He spent his childhood as an ordinary kid supported by a close knit group of family and friends who call him by the nickname "Buddy." From an early age, Elias would patiently wait for a cupa' PG tips tea with a heavy dose of milk and sugar from his mom. With the kettle roaring, Elias imagined far away fields of tea. If that sounds like the start of an adventure, it's probably because it was. Leaving home to venture out into the world, Elias studied International Business at Bryant University, where he concentrated in Finance and Entreprenuership and became interested in microfinance lending. His first international trip was to England, the land that created those PG Tips. A month later in a brief study abroad program, he served tea to his peers in the National Tea Museum of China. At the age of 24, Elias was recruited to an International Graduate Trainee Program with a multinational food retailer, which strongly emphasized personal development for future business leaders. Through this program, he realized the vital importance of personal growth and was drawn towards Zen meditation as a way to actualize it. Having found the aspiration to help all beings, Elias decided to take the study of Zen seriously. He set off to master Zen 'sitting meditation' while continuing to travel around the world in search of the best teas. Only later, did Elias realize that it was Zen monks who were the first promoters of tea, often drinking it before their periods of meditation to calm and focus the mind. After 7 years of devoted periods with intensive meditation practice in England, the United States and Japan, he now lives in Charlottesville, VA with his wife and son. Elias is dedicated to bringing together his passions for tea and mindfulness practice with his tea company, Mindful Tea. He invites others to share in the experience of 'just sitting and having tea'.