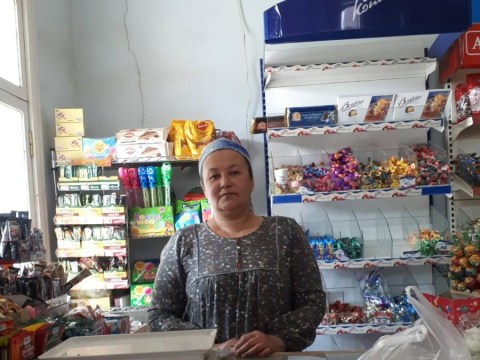 A loan helped to buy more products in order to increase her capital and get more income.

Umida is a 47-year-old woman from Tursunzade, Tajikistan. She is divorced and cares for her three children alone. This is an intelligent, clever and honest woman. For 25 years she worked as a teacher in a kindergarten, then she became a director of this kindergarten. She was a very polite, compliant, but strong director.

Her children grew up, and she realized, that her salary was insufficient for covering expenses. So she decided to make a business. Now she has been engaged as a business lady for two years. She opened a grocery store not far from her home, where she works hard every day. Because of her deep desire and purposeful character she was able to overcome this new activity, and at the moment she wants to expand her business.

Umida is a returning borrower and has a positive credit history. She is asking for a loan with Kiva’s partner IMON in order to buy more products for retail, increase her commodity and improve her income. The earned income she will use for building a house for her children, who are adult and should create their own families. Your help can allow Umida to realize her plans, and she hopefully awaits your support.