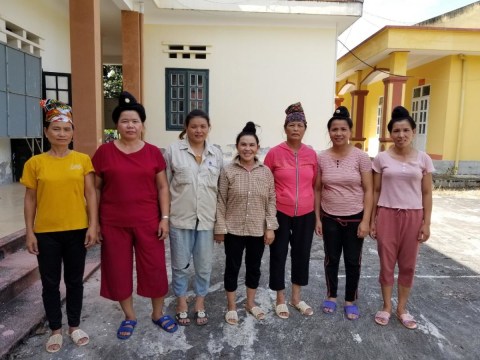 A loan helped to buy calf.

Huong, age 37, is a Thai ethnic woman. She divorced her first husband and is currently living with her second husband, her stepson, and her stepdaughter in a house located in a poor village in Dien Bien Province.

Huong is the main income earner in her family. She cultivates rice and sells groceries to generate income. In addition, she raises geese, chickens, pigs, and cows. Huong works very hard and always stives to expand her production so that she can improve her finances. She decided to request her eighth loan from the Anh Chi Em program so that she can invest in expanding her production. The proceeds will be used to buy a calf, which she hopes will be a profitable investment.

With her profits, Huong plans to buy a motorbike so that she can take her stepchildren to school. She will also cover their tuition and reinvest any remaining amount.

In the photo, Huong is the first person from the right.