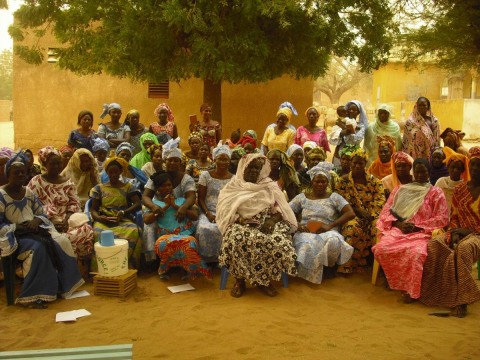 KEUR MAÏSSA G. is a women's promotion group composed mainly of women from the same village. It was founded in 2003, inspired by the solidarity and affinity that exists between the women. After the group had existed for seven years and the women had gained experience in group organization, they approached the micro-finance institution, CAURIE-MF, to make use of their financial services. Thus, on April 29, 2010, they became a Banc Villageois with the same name as their group and the village. They received their first loan on May 17, 2010 when they were inaugurated. Three quarters of the members are married and have at least two children; the average age of the women is 40. The President of the Banc Villageois, Madame Awa N., is 47 and has four children. She farms livestock and plans to use her loan to buy four goats, which she will raise for at least four months before selling them in the large weekly market in her village. She has been doing this for three years. In order to reduce feeding costs, she collects hay at the end of the rainy season and dries it so that it keeps better. Her goal is to help improve her family's standard of living by contributing to the cost of food, health care and clothing for her children. Her earnings also allow her to satisfy her own personal needs.