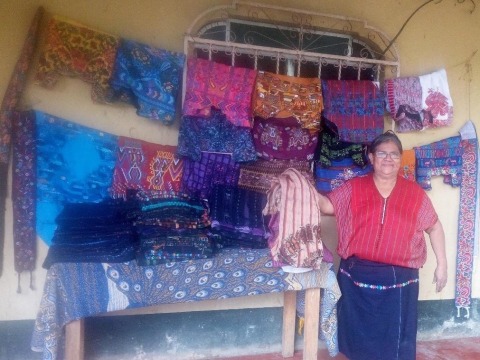 A loan helped to buy clothing and wood.

María is a 65-year-old widow with six grown children. She has a sixth-grade education. She speaks both Spanish and the Mayan language Quiche, and she wears traditional clothing. She lives in Santa Catarina Ixtahuacán, Sololá, Guatemala. For 27 years she has had a business making and selling traditional clothing. In the area where she lives, most of the women wear traditional clothing and there is a lot of demand. She also sells firewood.

María is starting her sixth cycle with the Namaste Creating Prosperity Program. She has had five series of Financial Literacy classes from which she learned, among other things, to track her sales and expenses, to keep a budget for both her home and business, and to provide good customer service. She also has had a personal business advisor to give her business advice. Following the advice she received, she expanded the types of clothing she sells, hired a saleswoman to sell her clothing in other towns, and improved her marketing. These classes and the business advice will continue in this new cycle.

She will use her loan to buy clothing and wood. Her goal is to have stalls, from which to sell her clothing, in the markets of a number of nearby towns.