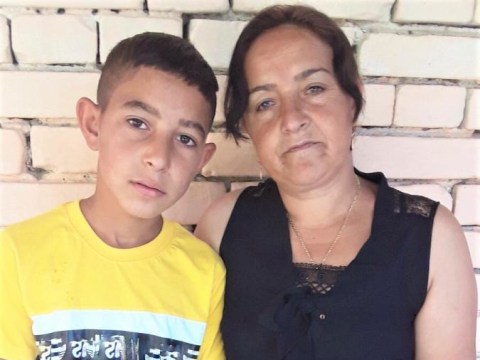 A loan helped to buy a sofa and beds for her home.

Vjollca is a widow and a mother of four who is requesting support from the Kiva lenders for the second time so that she can improve her family’s living conditions. "Three of my children are currently sleeping on the ground. I want to buy three sleeping beds and a sofa where we can sit while in the living room," Vjollca said with desperation during her interview.

She and her family are members of the Egyptian vulnerable community. Vjollca appears in the photo with her youngest son. Thanks to her business of selling used clothes, she is able to provide for her large family, which includes her four children, her daughter-in-law, and a young granddaughter. They all live in the same house that appears in the background. Vjollca is a kindhearted woman who also looks after several dogs and cats that she sees on the road.

She thanks all of the Kiva lenders for this opportunity and wishes them a prosperous new season!