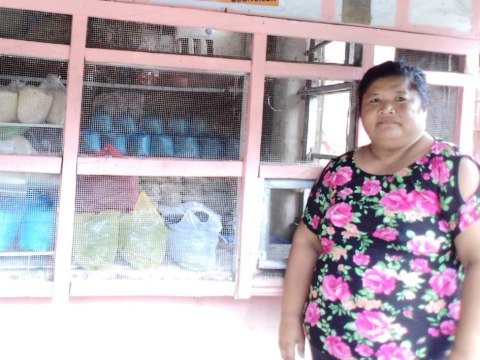 A loan helped to buy assorted groceries to sell, such as cooking oil, canned goods, soft drinks and tuba, a coconut wine.

Elnora is a married woman and has five children, two of whom are still attending school. To support her family she runs a sari-sari, or small general store where she sells commodities such as cooking oil, noodles, sugar, condiments, soft drinks and toiletries. She also sells tuba, a coconut wine. When she is not tending her shop, she also sells food to supplement their income.

Due to limited funds Elnora has decided to join CEVI and avail herself of a loan. She will use it to buy assorted groceries to sell, such as cooking oil, canned goods, soft drinks and tuba. With greater sales she could start to save and do some expansion.

Elnora is hoping that she will become an ever more successful entrepreneur and able to support the needs of her children.