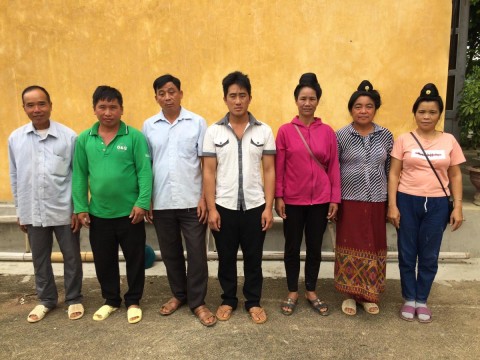 He Muong 18 Group's loan finished fundraising, but these similar borrowers just need a little more help to reach their goals!

A loan helped to buy fertilizer for her rice field.

Dom is a 45-year-old Thai ethnic woman who is married and has a son. Her son is 19 years old and studies in the army.

Now she lives with her husband in a Thai traditional house in a poor village of Vietnam’s northwest mountains.

Like other villagers, Dom works very hard at many small-scale agricultural activities such as growing rice, corn, raising pigs, geese, chickens and buffaloes.

Wishing to have more income from her production, Dom decided to take her sixth loan from Anh Chi Em program to buy fertilizer for her field.

Dom hopes that this investment will be as successful as the previous five loans and bring her a good income, which she will use to reinvest and support for her family.

In the picture, she stands at the first from the right.