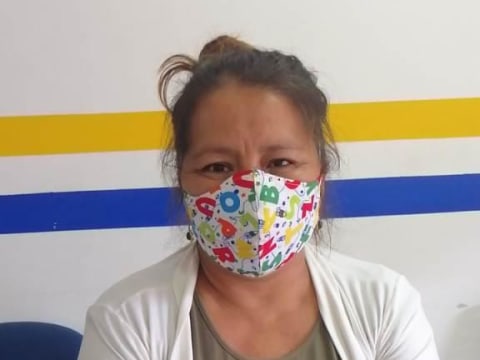 Betsy Jeanine, 42, is married with three children, two are grown-up and are studying in university, and the youngest, 14, attend school. Her husband is a police officer, and they live in their own house.

They live in Manta, a place affected by the earthquake of April 16, 2016, when buildings and stores were affected, and many lives were lost. Manta is considered the most important beach town of the area with beautiful and welcoming beaches. The majority of the population in this area make a living from fishing.

Betsy Jeanine makes a living selling women, men and children clothing at home and door-to-door across the city. She goes out selling two to three times a week, leaving the merchandise on credit, and collecting weekly.

During this worldwide crisis she has faced financial difficulties. Her customers cannot pay her because they have lost their jobs, while others have died. The health crisis was very difficult for her at the beginning since she was not able to work, but now her business is slowly reactivating, so she will be able to continue generating an income.

With this new loan she will buy t-shirts, pants, shorts, dresses, etc. Her dream is to have her own store to continue selling, and that her family enjoy good health.