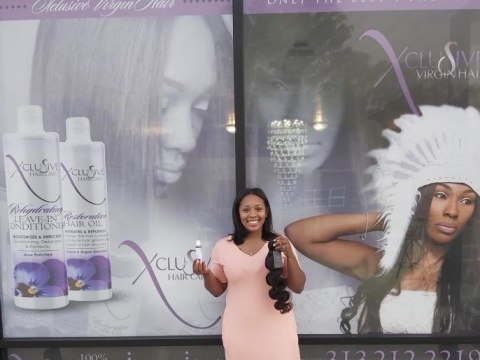 A loan helped me to sustain and grow our business to acquire more inventory to supply more clients.

My grandparents raised me in city of Detroit graduated from Thomas M. Cooley high school in 2000. My freshman year at Davenport University gave birth to my daughter. Finishing my goals I transferred to Northwood University to continue pursuing my degree. In 2003 Comcast hired me as a Sales Account Executive, 2007 gave birth to my second child my son and then until 2009 where I got layed off with severance pay from Comcast Cablevision. That is where my Entrepreneur journey began, I invested in myself and started to sale hair as an extra source of income where Xclusive Hair Capitol hair company was formed. I worked from home and drove around to shops to sale hair to salon owners. Built many business relationships in the hair industry and in 2011 finally finished my degree in business. A year later rented a space inside of Unique Day Spa in Southfield Michigan. In 2014 eventually was able to acquire for my first full service salon on 8 mile road and Schaefer until zoning issues arose in 2016 where it wasn't zoned legally for a salon based location. Waited 1 year and half to be at our current location which is on Livernois Ave been there since end of 2017. the hair industry for over 10 years. A single mother of 2 children one currently in nursing school & middle school student. Alumni at Northwood University (BBA). Former substitute teacher for DPS & charter schools for almost 8 years. Owner & Founder of Xclusive Hair Capitol branded hair company in Detroit on the Avenue of Fashion that’s offers hair care products, affiliate programs and private labeling in the beauty industry. A business and hair consultant as well as advocate mentor for the youth.